Oslo, Norway – December 11th, 2017 – Funcom today announced that Conan Exiles, the studio’s open-world survival game set in the savage lands of Conan the Barbarian, will shed its Early Access skin and launch in both digital and retail stores on May 8th, 2018. Currently available in PC Early Access and Xbox One Game Preview, May 8th next year will also see the premiere of Conan Exiles on the PlayStation 4. To celebrate today’s announcement, Funcom released a brand new trailer which also offers a glimpse at some of the new content that will make its way to the final version, including an entirely new biome and a new combat system.

PRICING ON ALL PLATFORMS ANNOUNCED

Funcom also announced today the final pricing for the game across all platforms. The PC version will launch at $39.99 while Xbox One and PlayStation 4 will launch at $49.99. Conan Exiles is currently available on PC at the $29.99 Early Access price point, while Xbox One is available in Game Preview at $49.99. The PlayStation 4 version will not be available to play before full launch on May 8th, 2018. Everyone who purchases the game on PC or Xbox One in digital stores prior to launch will also receive the Conan’s Royal Armor in-game item at launch. Digital pre-orders will start on PlayStation 4 at a later date and will also include this exclusive item.

Funcom is excited to be teaming up with Koch Media to deliver boxed physical copies of Conan Exiles to stores. Pre-orders of the physical boxed version have now begun with select retailers for PC, Xbox One, and PlayStation 4. Gamers can pre-order the Day One Edition that contains a printed map of the Exiled Lands, along with the iconic Conan’s Atlantean Sword in-game item which is only available through pre-ordering the physical retail version. The official website will be updated throughout the week as retail outlets start listing the pre-order. 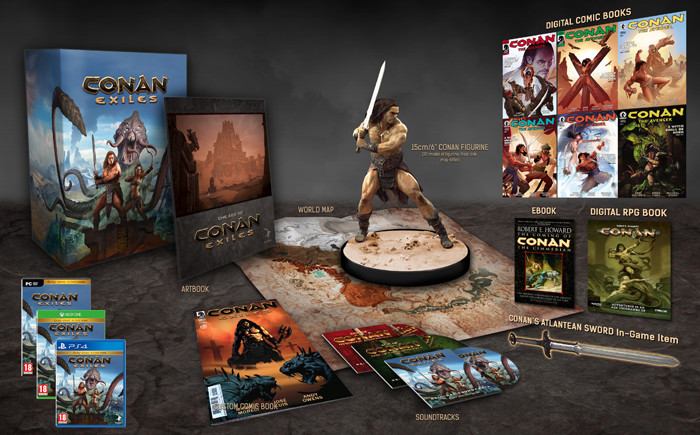 Last, but certainly not least, Funcom is thrilled to announce that a Collector’s Edition is now available for pre-order at select retailers. This one-of-a-kind edition contains a wealth of exclusive items both physical and digital sure to satisfy any fan of Conan the Barbarian and Conan Exiles.

“Early Access and Game Preview has been an absolutely invaluable tool for us in developing Conan Exiles,” says Creative Director Joel Bylos. “Being able to get direct feedback from players has allowed us to focus our work on improvements, bug fixes, and new content. We still have a few months to go and are by no means done squashing bugs and making improvements. We’re working hard on new content and gameplay mechanics – including the new jungle and volcano biomes!”

Conan Exiles entered Early Access on PC on January 31st this year. The game is an open-world survival game set in the brutal lands of Conan the Barbarian. Here players must survive in a savage world, build their kingdom, and dominate their enemies in brutal combat and epic warfare. You start with nothing but your bare hands and forge the legacy of your clan, building anything from a small home to gigantic fortresses and entire cities. Wage war using swords, bows, siege weapons, and even take control of giant avatars of the gods and lay waste to enemy cities. Conan Exiles can be experienced in both local single-player and in persistent online multiplayer.

About Conan Properties - Conan Properties International LLC owns and manages the "Conan the Barbarian" brand through all forms of media, including motion picture, television, gaming, publishing and toy industries. One of the most universally recognizable iconic figures in modern popular culture, Conan was born from the creative genius of pulp fiction author Robert E. Howard. The company is part of the Cabinet Entertainment group.