The Command & Conquer-veterans from Petroglyph faced a new challenge when tailoring Conan Unconquered to suit perfectly for co-op.


OSLO, Norway – May 21th, 2019 – With only a few more days to go until launch, Petroglyph and Funcom have now released a new video, featuring interviews with Command & Conquer-veterans on the production team and a further glimpse into the co-op aspect of Conan Unconquered.

While most comparable RTS games are purely single-player games or 1v1, the development team behind Conan Unconquered were faced with a new challenge; namely producing a game that works equally well in co-op mode.

“We’re trying to make it as cooperative an experience as possible,” explains Executive Producer Ted Morris, who in addition to working on Command & Conquer can boast of having been the Development Director on the critically acclaimed RTS Star Wars: Empire at War.

In co-op mode each player will have their own hero and army, but they will share resources and most of the buildings. “Where the challenge comes in, is in trying to coordinate between the two of you, in order to fight more difficult mobs,” says Senior Game Designer Patrick Pannullo, adding that it is not simply going to be about double the number of enemies. Instead the increased difficulty will mainly be about what kind of mobs you face and where the attacks will come from.

The upcoming game will also feature a previously unannounced mechanism called challenge mode, which allows you to create and share a link with the exact same map, settings and unlockable feats as in the game you just had. This allows you to challenge your friends to beat your own score in a much more comparable way than it would have been with everything randomized. Each link will also come with its own leaderboard.

The new feature should be particularly welcome news for streamers, who can challenge their own fan base to beat their score on the exact same map as they played on stream. 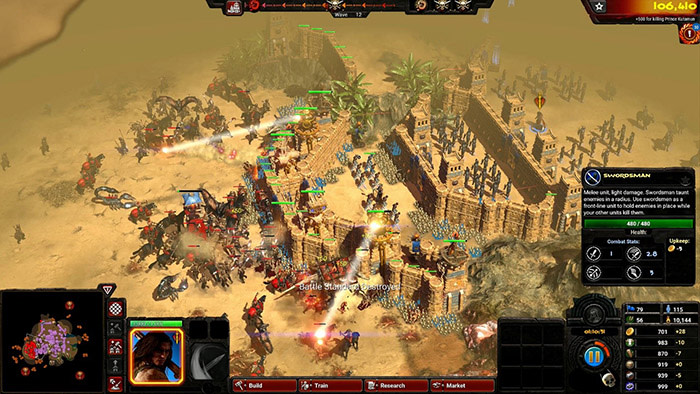 As you progress in Conan Unconquered, each wave is going to hit you harder. How many waves can you withstand?

The game is currently available for pre-order on Steam and via  www.conanunconquered.com.

Conan Unconquered releases on May 30th.

ABOUT PETROGLYPH GAMES - Based in Las Vegas, Petroglyph has over 30 employees with many team members coming from Westwood Studios, creators of Command & Conquer. They’ve been responsible for a range of tactical and strategic PC games including Star Wars: Empire at War, Grey Goo and the recent ‘8-Bit’ RTS series. They are also currently developing the remaster of Command & Conquer to be released by Electronic Arts.