Fight for survival on an island inhabited by Elder Races, eldritch monstrosities and castaways. Build monumental castles and cities from majestic stormglass. Dominate your every foe. Isle of Siptah released today in early access as the next big Conan Exiles adventure.

OSLO, Norway – Sept 15th, 2020 – With a massive new map, more than a dozen new dungeons, and game-changing features, such as Surges of Sorcery and The Maelstrom, Isle of Siptah promises to be a whole new way to experience the online survival game Conan Exiles. Today, Funcom are thrilled to announce that the expansion has now been released into early access on PC, with full launch on PC, PlayStation and Xbox to follow in early 2021.

The expansion is set on a mysterious island, where massive storms and great surges of sorcery have dominated the skyline for centuries. Why these events are taking place and what significance the fabled sorcerer Siptah holds, is something the players will discover for themselves, as they explore the islands many underground vaults. Isle of Siptah is plentiful with secrets to be discovered, dating all the way back to the first war between the Elder Races and mankind.

The surges of sorcery act as a link between the Exiled Lands and the Isle of Siptah, forcefully dragging humanoids from the mainland to the island. While the great tower in the middle of the island was still inhabited, these unfortunate souls would serve as human sacrifice or worse. Now, they’ve become the centerpiece of conflict, as exiles seek to control the surges for their own benefit.

Players get to start anew in Isle of Siptah, making this the perfect time for new and returning players to get into the action – as everyone will start at a level playing field. Acquiring the expansion while in early access will also grant the player a limited-edition War-torn Rhino mount skin – as well as give access to new mounts and building pieces in both the expansion and the base game.

Conan Exiles: Isle of Siptah is available in Steam for USD 19.99 / EUR 19.99 / GBP 17.99. Acquiring the game while in early access, will save money compared to acquiring the game at launch. The base game is currently available at a massive 65% discount in the same store. This offer ends on September 21st.

See the official Conan Exiles website or download the game fact sheet from the Funcom FTP for more information. 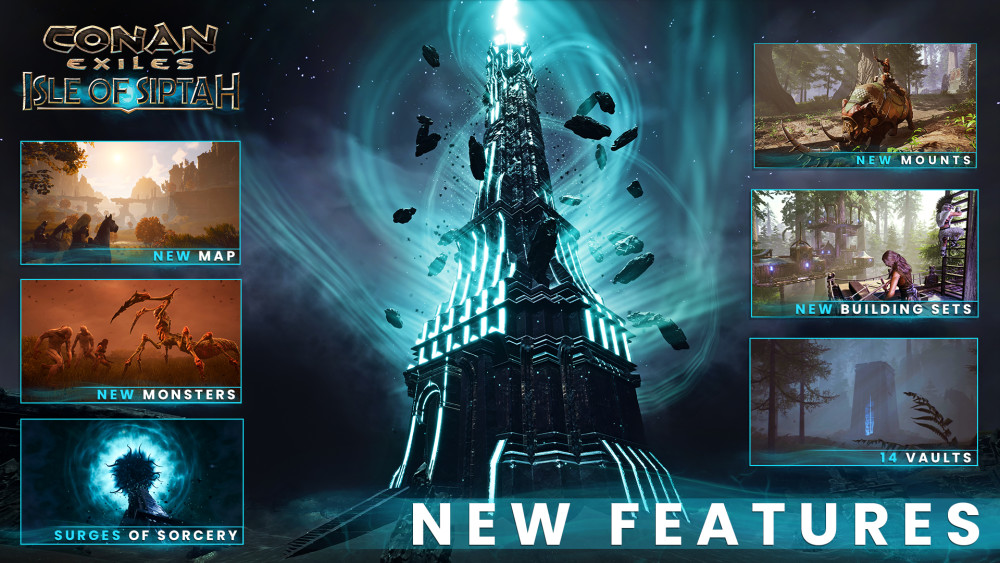 ABOUT FUNCOM - Funcom is a developer and publisher of online games for PC and consoles. Funcom has provided outstanding entertainment since 1993 and continues to expand its track-record of more than twenty released games. Titles include ‘Conan Exiles‘, ‘Secret World Legends, ‘Age of Conan: Hyborian Adventures’, ‘The Longest Journey', 'Anarchy Online', 'The Park', and 'Dreamfall: The Longest Journey'. For corporate information please visit www.funcom.com. For information about Funcom games visit www.conanexiles.com, www.secretworldlegends.com, www.anarchy-online.com, www.dreamfall.com, www.theparkgame.com, or www.ageofconan.com.